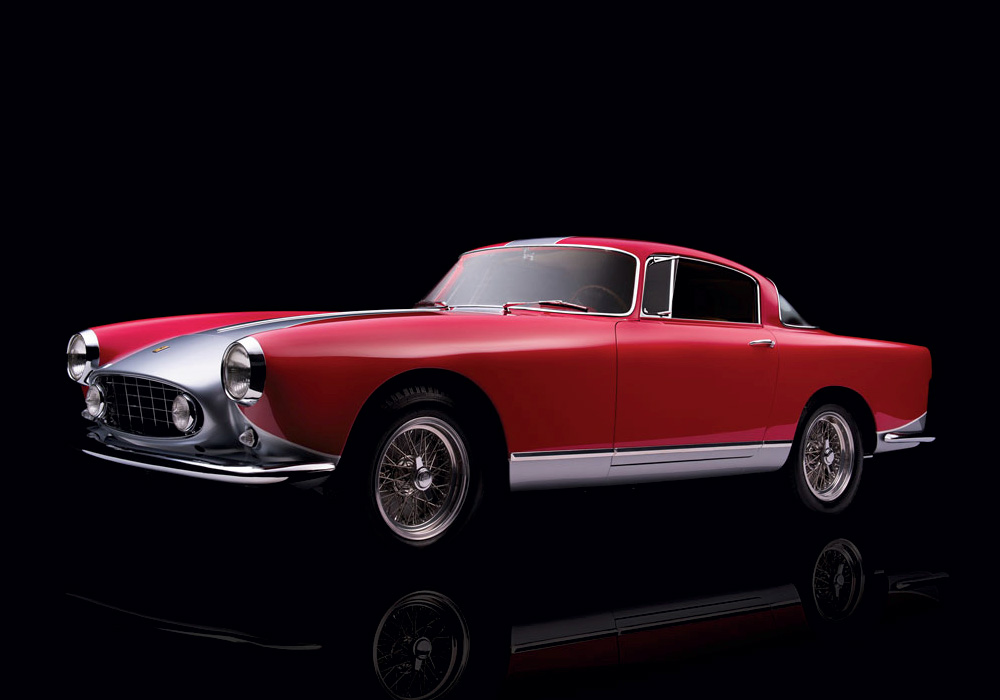 Enzo Ferrari’s passion may have been racing cars, but by 1950, he had begun to accept that exclusive road cars were needed to finance the company’s growing competition efforts. Early Ferraris for the street were built in very small numbers, usually to special customer order and with no attempt made at standardization. A significant change occurred in 1954, when the Pinin Farina-designed 250 Europa GT debuted in Paris. It was Ferrari’s first true “production” model, and it would form the foundation for all future Ferrari 250 models. These included the second series, which was again designed by Pinin Farina.

At the time of the 250 GT Series II’s unveiling, Pinin Farina was in the process of building a new, much larger production facility, and they did not yet have the space to build the somewhat larger quantities of cars that Ferrari was requesting. Accordingly, the design they created was handed over to Carrozzeria Boano, which was headed by one of Pinin Farina’s designers, Mario Felice Boano. Boano proceeded to build 67 cars, which had slight styling alterations from the five cars that Pinin Farina had already built, with the most notable being a lower wing line. When Boano’s namesake moved to Fiat in 1957, Ezio Ellena, his son-in-law, took over production, now under the banner of Carrozzeria Ellena. Ellena also made minor cosmetic changes, with the main one being a raised roofline, which prompted the use of the terms “Low Roof” for Boano bodies and “High Roof” for the Ellenas.

The car described here, chassis number 0447 GT, is a very special early Boano Low Roof Coupe. According to Ferrari historian Marcel Massini, the assembly of 0447 GT’s mechanical components began on October 20, which was followed by re-assembly and dyno-testing on October 26, the same day that the rear axle assembly was completed. It appears as if the car was originally intended to sport Pinin Farina bodywork, as it was bestowed with Pinin Farina body number 14995 and shipped to them on October 31, 1955. However, Massini notes that 0447 GT was subsequently sent to Carrozzeria Boano instead, where it was fitted with its present lightweight alloy Low Roof Coupe bodywork, as Pinin Farina was too busy with other projects at the time. This body was similar in essence to other early 250 GTs, including the 1956 Geneva show car, chassis number 0429 GT, and chassis number 0443 GT, which had won its class in the 1956 Alpine Rally and took overall victory in the 1957 Acropolis Rally. Chassis number 0447 GT, however, had numerous unique features in its original form, including a distinctive, subtly up-swept beltline break just behind the doors. The car was photographed in this configuration in period, as depicted on pages 192 and 193 of Angelo Tito Anselmi’s Le Ferrari di Pininfarina.

However, shortly after completion, chassis number 0447 GT was returned to Carrozzeria Boano and underwent a number of cosmetic detail changes. Revisions included a new, unbroken waistline from the front to the rear fenders, with the front fenders tapering off to end at the headlight rims. The turn signal indicators on the B-pillars and the Pinin Farina badges at the base of the body flanks were eliminated, as was the license plate bracket on the front bumper. Following these revisions, the body was refinished in its original color, Grigio Metallizzato (LC 48), while its blue Connolly Vaumol Luxan grain leather (VM 3087) interior remained unchanged.

The car was completed in its final form on July 30, 1956, and sold in August 1956 to its first private owner, Guido Cantelli, who was a famed orchestra conductor of the period. Unfortunately, Signor Cantelli was only able to enjoy his new car for three months, as he met an untimely end in a plane crash at Orly airport, just outside of Paris, France, shortly after being named director of the famed La Scala opera house. Virtually unused, the late conductor’s Ferrari was exported to the United States, where it was owned until the 1960s by a handful of enthusiasts.

In 1986, the Boano was advertised for sale in the Ferrari Market Letter by John A. Hayes, of North Carolina. It was acquired later that year by Lyle Tanner Enterprises, of Carson, California, and it was restored by them in dark red with a grey interior. In this form, the car was sold to Ken Behring’s Blackhawk Collection.

Noted Ferrari dealer and collector Fredrijk “Fritz” Kroymans, the official importer for the Netherlands, ultimately acquired chassis number 0447 GT in 1992, and he retained it for nearly 20 years. It was acquired in 2010 by well-known and respected American collector Tom Price, who continued to preserve its quality older restoration. Later, it was preserved in another well-known American Ferrari collection, until it was purchased by the present caretaker.

In his care, the car has received a full engine rebuild, which was performed by noted Ferrari mechanic Frank Buonanno and Matt Carfo, of Black Horse Garage in Bridgeport, Connecticut. It was also refinished in its present Tour de France color scheme. It was then officially accepted into the 2014 Mille Miglia Storica, but it did not participate due to the owner’s personal reasons. It remains a spectacular candidate for that fabled event, as well as for any other tour, show, or historical exhibition.

As one of the earliest Low Roof Boano Coupes, this fascinating alloy-bodied creation marks an important link to the origins of Ferrari’s commitment to making the 250 GT the world’s finest road car. It also marks the moment in time when Pinin Farina became the preferred designer of Ferrari road car bodies, which was a careful move to create greater standardization. Simply put, it is the evolutionary link between Pinin Farina’s 250 GT prototypes and the Boano-bodied “series production” cars, and it holds an irreplaceable place in Ferrari history.