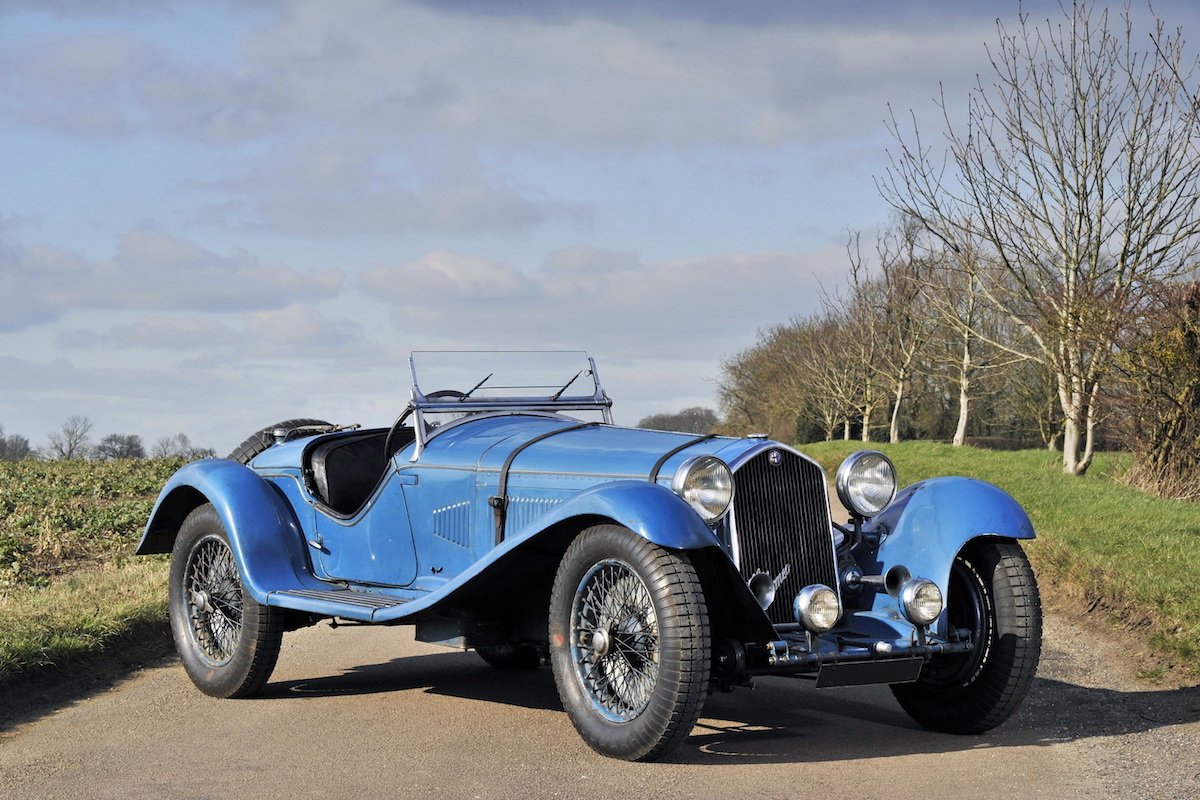 Originally hired in 1923 to design a race winning machine for Alfa Romeo, engineer Vittorio Jano was reassigned to road car development after the company retired from racing at the end of two very successful seasons. The first road car he produced was the 6C 1500 launched early in 1927. While the six cylinder engined Alfa was designed specifically for road use, the higher performance versions proved to be very competitive on the track. In fact the 6C won the Mille Miglia for three years running. Encouraged by the success of the 6C, Alfa Romeo brought out Jano's old P2 Grand Prix car for 1930 and commissioned him to design a brand new sports racer and GP car for 1931. The new GP car was a hugely complex twin engined machine that was hardly competitive, but the new 8C 2300 sports racer has gone into history as one of the finest and most successful racing cars ever constructed.

Jano's biggest priority was designing a new and most importantly larger engine to take on the ever growing competition. As with the P2 of 1924, he opted for a straight eight configuration, but he started with a clean sheet. The engine was built up from two blocks of four cylinders with the gear drive to the overhead camshafts sandwiched in between. This effectively cut the length of the camshafts, which are prone to flexing in engines this long, in half. The two blocks were initially cast in steel, which was soon replaced by a lighter aluminium alloy. Also driven from the centre of the engine was a Roots-Type Supercharger. The displacement was set at just over 2.3 litre engine by virtue of an exceptionally long stroke of 88 mm compared to a bore of 65 mm. In standard trim the engine produced between 155 and 165 bhp. The competition engines were good for around 180 bhp. Towards the end of the 8C 2300s life, many engines were bored out to keep the cars competitive.

One of the reasons the 6C was so successful was the nimble and lightweight chassis. Its sheet steel ladder frame was carried virtually unaltered and offered in short (2750 mm) and long (3100 mm) wheelbase versions. Suspension was also very conventional by live axles, semi-elliptic leaf springs and friction dampers all-round. Stopping power was provided by cable operated drums. Bolted to a four-speed gearbox, the straight eight engine was installed behind the front axle. A short wheelbase rolling chassis weighed in at 1000 kg. The chassis were delivered to preferred coach builders Touring and Zagato, who bodied both the street and racing cars. Between 1931 and 1934 a total of 188 chassis were produced in three series, many of which were raced in period.

The first 8C 2300 was ready in time make its debut at the 1931 Mille Miglia, a gruelling race even for thoroughly developed cars. Two Zagato bodied cars were entered for Tazio Nuvolari and Luigi Arcangeli. The new 8Cs were blisteringly quick, which could be taken very literally as both suffered from tyre problems throughout the race. This handed the lead to Rudolf Caracciola in the massive 7.1 litre Mercedes-Benz ssK. In a desperate attempt to close the seventeen minute gap, Nuvolari went all out, but eventually crashed out; blinded by the dust cloud of the leader. Revenge came a few weeks later when a fully recovered Nuvolari took the 8C 2300's first major victory during a very wet Targa Florio. It marked the start of many successful years in these great Italian road races, which were both won by the 8C 2300 three times in a row.

The two cars used during the Targa Florio were of a slightly different specification and used a slightly shorter wheelbase of (2650mm). These were built as a stop-gap for Grand Prix racing before the twin-engined 'Tipo A' was ready. Both cars were raced side by side during the Italian Grand Prix at Monza on May 25th. The Tipo A's debut was devastating with a fatal crash in practice with Arcangeli behind the wheel and the two cars entered in the ten hour race retiring very early. Nuvolari jumped from his Tipo A into an 8C 2300 after two hours and together with Giuseppe Campari he won the race. The subsequently built Grand Prix 8C 2300s were referred to as the Monza in honour of this win. Interestingly the slotted radiator cover that became the most typical feature of the 'Monza' was not found on the cars that raced in 1931. The 8C 2300 was successfully raced in Grands Prix until it was replaced by the Tipo B Monoposto in 1932.

Hot on the heels of the Italian Grand Prix came the 24 Hours of Le Mans for which another distinctly different version of the 8C 2300 was prepared. This time the long chassis was used as additional space was required to fit the mandatory four-seater coachwork, which was built in aluminium by Zagato. Three cars were prepared, but only two were entered in the race after the third had blown its engine in practice. The strongest competition was again formed by the massive ssKs, which were right at home on the French track with its long straights. The Works entered 8C 2300 crashed out after 99 laps, leaving the British entered example to defend the Italians' honour. Driven by entrant Lord Howe and former Bentley-boy Tim Birkin, the 8C survived the 24 hour race and finished over 100 km ahead of the fastest Mercedes. The 8C dominated the race in the following three editions, scoring a 1-2-3 in 1933 and coming very close to winning the legendary race for a fifth consecutive time in 1935.

Although the Bugatti Type 35 has gone into history as the most successful racing car ever, the Alfa Romeo 8C 2300 ranks as a close second or possibly even the Type 35's equal with three wins in the Mille Miglia, three in the Targa Florio, four at Le Mans and the Grand Prix victory at Monza. For all its successes on the track, it is quite remarkable that the 8C 2300 was available to any customer for road use. One of the reasons the 8C 2300's successes are forgotten at times is the attention grabbed by the Tipo B Monoposto Grand Prix car and the 8C 2900 sports racer that replaced it. All three of these fantastic machines were designed by the great Vittorio Jano and successfully raced by some of Italy's greatest racing drivers. The thirties was certainly the finest decade in Alfa Romeo's history.

The sole short chassis 8C 2300 clothed by Figoni, this example was delivered new to its first owner (mr Weinberg) early in 1933. He promptly entered it in the Paris-Nice rally in March of that year and again in 1934. Chassis 2211079 was then acquired by Count Francois de Bremon, who also raced the car at select events including the 1935 Grossglockner Hill Climb where he placed seventh overall. The car was then sold through Luigi Chinetti to a French enthusiast, who offered it to his son as 21st birthday present. As it turned out, he would cherish car for the rest of the life and eventually disappeared from sight until it was re-discovered in the early 2010s. It resurfaced in a time-warp and was brought back to running order in recent years for the current owner by Blakeney Motorsport. In March of 2016, it was shown for the first time in public at the Royal Automobile Club in London.

We have 9336 visitors online