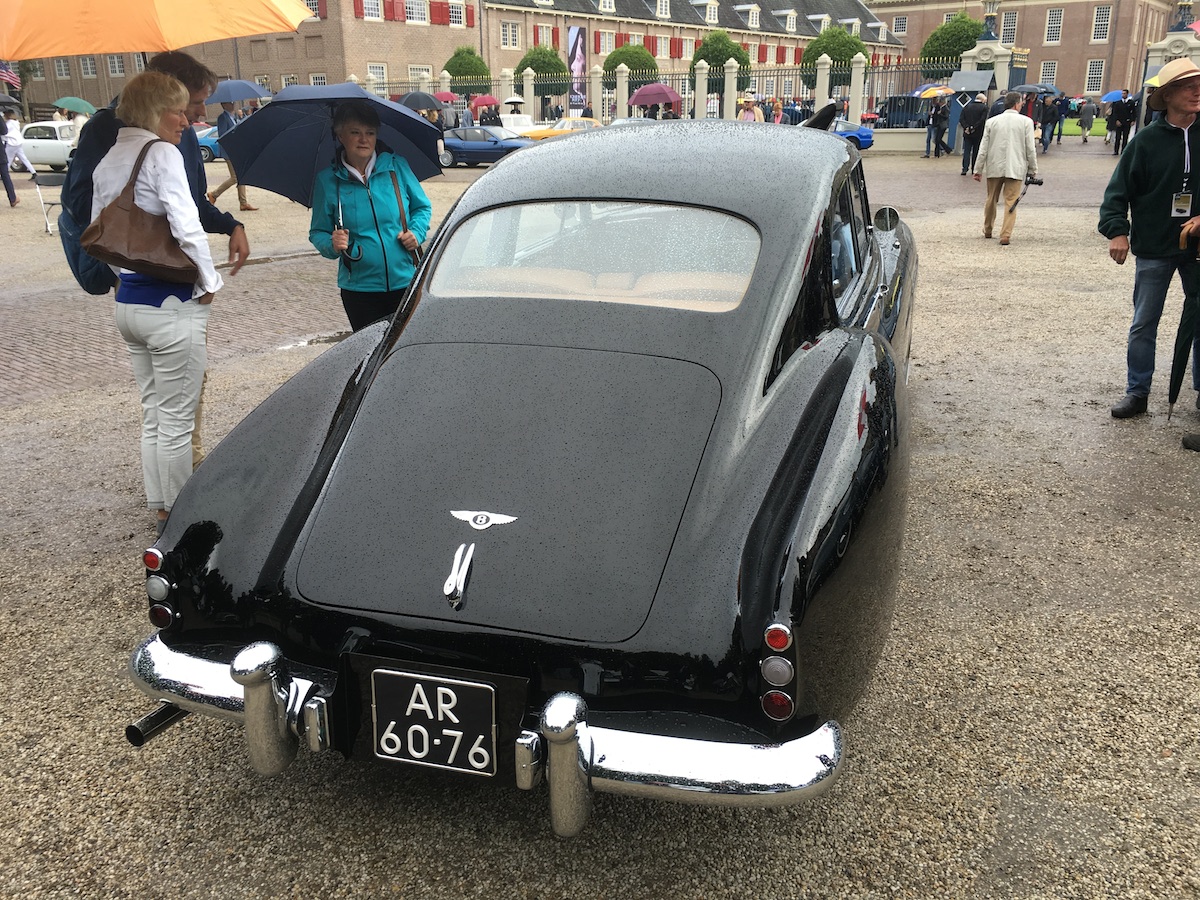 This car (chassis No BC73D) was formerly owned by the Shah of Iran. The car was purchased in 2006 by Frank Dale (UK) in the United States in poor condition and brought back to London to restore. Work included engine, gearbox and suspension overhauls, new exhaust system, chassis repairs and restoration, total coachwork restoration including new rear wheel spats being fabricated from scratch, chrome restoration, new glass, new rubbers and seals, electrical re-wire, complete interior restoration including new headlining, new leather and restored woodwork. A top class restored Bentley Continental that has been extensively used across Europe ever since.
This car is in Dutch ownership and was displayed at the Concours d’Elegance Paleis het Loo 2016.

The R-Type Continental (1952-1955) was a high-performance version of the R-Type. It was the fastest four-seat car in production at the time.The prototype was developed by a team of designers and engineers from Rolls-Royce Ltd. and H. J. Mulliner & Co. led by Rolls-Royce's Chief Project Engineer, Ivan Evernden. Rolls-Royce worked with H. J. Mulliner instead of their own coachbuilding subsidiary Park Ward because the former had developed a lightweight body construction system using metal throughout instead of the traditional ash-framed bodies.The styling, finalised by Stanley Watts of H. J. Mulliner, was influenced by aerodynamic testing conducted at Rolls-Royce's wind tunnel by Evernden's assistant, Milford Read. The rear fins stabilised the car at speed and made it resistant to changes in direction due to crosswinds.A maximum kerb weight of 34 long hundredweight (1,700 kg) was specified to keep the tyres within a safe load limit at a top speed of 120 mph (190 km/h).The prototype, with chassis number 9-B-VI and registration number OLG-490, which earned it the nickname "Olga", was on the road by August 1951. Olga and the first series of production Continentals were based on the Mark VI chassis, and used a manual mixture control on the steering wheel boss, as these versions did not have an automatic choke.The early R Type Continental has essentially the same engine as the standard R Type, but with modified carburation, induction and exhaust manifolds along with higher gear ratios. The compression ratio was raised to 7.25:1 from the standard 6.75:1,while the final gear ratio was raised (lowered numerically) from 3.41 to 3.07.Despite its name, the two-door Continental was produced principally for the domestic home market, most of the 207 cars produced were right-hand drive, with 43 left-hand drive examples produced for use abroad. The chassis was produced at the Rolls-Royce Crewe factory and shared many components with the standard R type. R-Type Continentals were delivered as rolling chassis to the coachbuilder of choice. At first, the H.J. Mulliner aluminium shell was used on every Continental . who mainly built them in fastback coupe form, and not until spring of 1954 were R-Types fitted with bodies from other coachbuilders came from Park Ward (London) who built six, later including a drophead coupe version. Franay (Paris) built five, Graber (Wichtrach, Switzerland) built three, one of them later altered by Köng (Basel, Switzerland), and Pininfarina made one. James Young (London) built in 1954 a Sports Saloon for the owner of the company, James Barclay.The R-Type Continental rapidly acquired a great reputation and its ideas spread to other models. The Continental’s reduced weight and lower frontal area enhanced its performance, and it is perhaps the most desirable post-war Bentley. Magazine reviews were unanimous in their praise. England’s best known car publication, Autocar, described the Continental as, “a modern magic carpet annihilating great distances”. The list price in 1952 was a shade over £7,000, sufficient to buy a decent house with a few acres of land in the Home Counties in those days. It was certainly not for the faint of heart, as it was also the most expensive car in the world when new.When the American industrialist S.H. “Wacky” Arnolt ordered his personal Bentley, he had the chassis sent to Bertone of Milan. Earlier that year he had partnered with the Italian coachbuilding firm to produce a series of cars built using MG chassis as the base. The custom body that would be fitted to his Bentley R-Type was in essence an enlarged version of the body being fitted to the MG. Before Arnolt took delivery of his Bentley, Bertone showcased the car beside the MG Arnolts at the 1953 Paris and London Motor Shows. The large radiator and proportions of the Bentley R-Type lent themselves perfectly to the Italian coachwork, and the length created by the four doors aided the cars aristocratic yet sporting sensibilities. The interior was luxuriously appointed and customized to Arnolt’s specifications. Lifting up the wooden trays inserted to the rear of the front seats revealed three silver flasks engraved with the Wacky’s initials and crystal glasses. Where Mrs. Arnolt sat, on the right side of the car, the tray in its upright position, reveled a compartment specially made to hold her favorite perfume and cosmetic supplies.Given its heroic price, early owners included industrial titans Stavros Niarchos, Gianni Agnelli, and Aristotle Onassis, members of the Guinness, Embiricos, Rothschild, Mavroleon, Carnegie, and McAlpine dynasties. Automotive legends that chose an R-Type Continental included Donald Campbell, Georges Filipinetti, Stanley Sears, Briggs Cunningham, and Jack Dunfee, and included such Royal Patrons as the Maharajah of Indore, the Emperor Bao-Dai, the Aga Khan, Prince Frederick of Prussia, and the Shah of Iran—a veritable roll-call of the 1950s international jet-set!The early R-Type Continental had essentially the same engine as the standard R-Type but with modified carburation, induction and exhaust manifolds along with higher gear ratios. The A, B and C Series cars were fitted with 4.5 litre engines. This robust engine also utilized forged steel connecting rods, a forged nitrided steel crankshaft, cast aluminum pistons, and wet sump lubrication. Known as the B-60 engine, it produced 158 brake horsepower, thanks to dual SU H-6 carburetors, relatively high compression, and a large bore exhaust system. In July of 1954 production of the D-Series cars began with the bore increased to 3¾ inches, raising the displacement to 4,877cc as present here. Mated to a manual gearbox as with BC41D the result is a potent continental cruiser or surprisingly docile and manageable city charger.While the first 89 Continentals were equipped with four-speed manual gearboxes, the first automatic transmissions appeared midway through Series C production. Based upon the General Motors Hydra-Matic unit, the automatic transmission featured four forward speeds, wider ratio spacing than that of the manual gearbox, and a direct drive fourth gear. All automatic-equipped cars utilized a shift lever mounted on the steering column, and in all, 166 cars were fitted with manual gearboxes, while 42 examples were equipped with the automatic transmission.