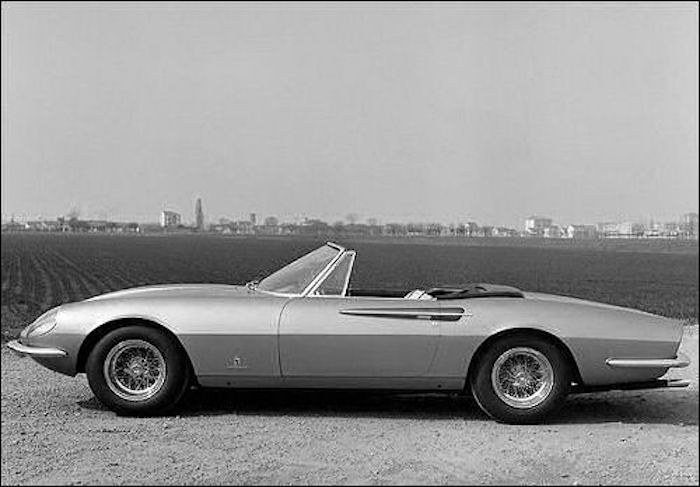 Ferrari was a bit snobby at times, being “two tiered” in that they had the regular catalog models anybody could buy and then, if you were a VIP or a Royal, you could order something special, something limited edition. Such a car was the Ferrari 365GT California Spyder. It remains a very unusual Ferrari, with a very small edition, fourteen cars in total.

It was designed by Tom Tjaarda, an American who had gone over to Italy following his graduation from U of M with a degree in architecture. His real dream? Designing cars in Italy. He designed for Pininfarina (also doing the Corvette Rondine one off show car) and for Ghia where he did the DeTomaso Pantera.

He told me about the Ferrari 365GT California Spyder. “The headlights weren’t in the right place for the American laws” he recalled, “so we added pop up headlamps that were at the right height.”

This car is even more rare than the Superamericas or the three dozen 500 Superfasts – both limited edition models for VIPs.

They were built at the rate of around one a month, between 1966 and 1967. Never again would a Ferrari road car be built in such small numbers. When you encounter one in person, it takes a little getting used to in that it is so long—at 4.9 meters in length, thanks to the massive front and rear overhangs, and is the longest convertible Ferrari ever built until the introduction of the four-seater 612 Scaglietti in 2004.

The styling has its own unique characteristics, the side scoops being the most interesting. The nose is precise, the pop-up headlights hardly noticeable, and the crease running over the fenders from the front to back is like a crease on a finely tailored pair of pants.

The cut-off tail is the only part that seems haphazard, with an upper taillamp and then duplicating the issue with round taillights below that like they were going to go with one or the other but went with both (also seen on a Lancia prototype by Tjaarda also built by Pininfarina).

The air scoops on the doors were non functional though theoretically they could have been plumbed to deliver cold air to the rear brakes.

The Geneva show car was built on a 330 GT 2+2 Type 571 chassis, while the remaining run used the almost identical Type 598 chassis. The main difference was the use of coil springs at the rear instead of the semi-elliptic leaf springs on the first car.

The car was more expensive than the mass produced Ferraris, built only to special order. Most went to the USA though foreign customers included a Marquis and one of the sons of the nasty dictator Rafael Trujillo.

One of the joys of these special cars is that they often differ in details, some have different taillights or interior details.

The last car went to a British customer late in 1967.

Though it seems ridiculous to abandon a model when only 14 had been built, time marched on and it was replaced by a mass produced coupe, the 365 GT 2+2, made in a much bigger number–800 cranked out between 1968 and 1971.

These cars were bypassed by many collectors in the Sixties and Seventies because they weren’t fast and didn’t have corresponding racing versions but now they are appreciated for their unique styling and rarity plus four seats.

This particular open California, SN 10077, was built in May, 1967, and rolled out the door in Rosso Rubino with a tan interior,

This Ferrari 365GT California Spyder belongs to the Nethercutt Museum in Sylmar, CA. It was originally sold to Sam Goldstein but went to the Nethercutt Collection in the 1980s, a vintage car museum known for its reverence for originality.