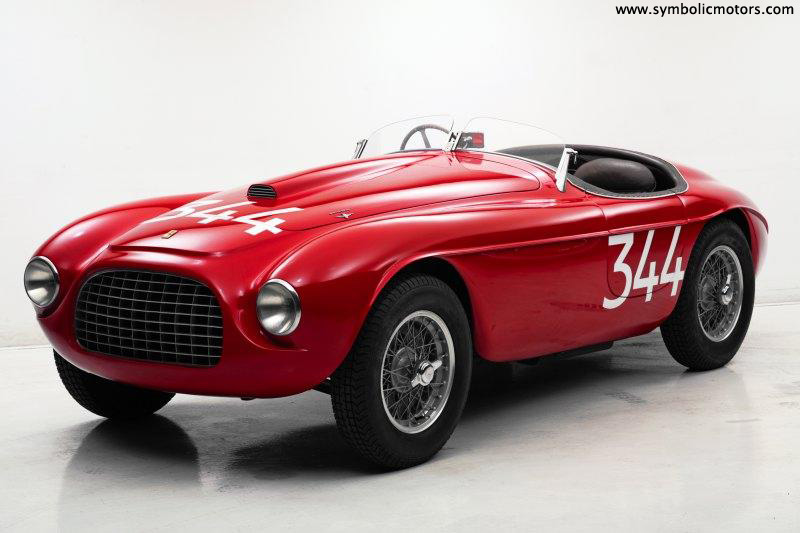 The 166 was the culmination of Ferrari's early racing and development. It achieved unprecedented competition successes that formed the foundation of the Ferrari legend. One of the most important or significant Ferrari model is the 166, especially the 166 Mille Miglia version.

The original 1 1/2 liter Ferrari 125 V12 was successful but postwar racing regulations soon adopted a two liter limit for Formula 2. Ferrari increased the 125's 55x52.5mm bore and stroke to 60mm bore and 58.8mm stroke, bringing the Ferrari V12 to nearly the optimum two-liter displacement: 166.25 cc per cylinder, 1,995 cc in all.

First produced for Scuderia Ferrari with cycle fendered Spider Corsa bodies adaptable to both Formula 2 and sports car competition, Ferrari also built two long wheelbase (2620mm) 166 Sports one of which, coupé-bodied by Allemano, was driven by Clemente Biondetti and Giuseppe Navone to a stunning overall victory in the 1948 Mille Miglia. Ferrari then added "Mille Miglia" to its model name, leaving potential clients no doubt whatsoever that their new Ferrari carried within it the spirit and performance of Biondetti's winner in the most demanding and prestigious sports car race in the world.

The 166 chassis was simple, effective, reliable and easily adapted to different requirements. The frame was based upon two oval tubes with X-members for torsional strength and outriggers to support the body. Ferrari turned to Felice Bianchi Anderloni's Carrozzeria Touring to create lightweight bodies for the 166. Enzo Ferrari's relationship with Touring had begun years before when Touring supplied bodies for Scuderia Ferrari's Alfa Romeo competition and sports cars and for the two Auto Avio Costruzione 815's which Ferrari created for the 1940 Mille Miglia.

Two versions of the series-production Ferrari 166 MM debuted at the 1948 Turin Motor Show in November. On the Touring stand was a long wheelbase "coupe 2-3 posti". On Ferrari's display was the similar Touring-bodied two-seat roadster, the "Spider da Corsa". Both were daring departures from conventional designs. Touring's design for the 166 MM "Spider da Corsa" was so cohesive, dramatic and evocative that it belies the 166 MM's diminutive size. Carlo Felice Bianchi Anderloni observed that the design was so different from conventional spider style sports cars that observers were challenged to describe it, eventually coming up with the name barchetta, or "little boat", to encompass its concept. It is one of the most influential designs in automotive history, contributing its elements to literally hundreds of automobiles from Ferraris to the Shelby Cobra. The Barchetta style became so recognized and so thoroughly integrated with Ferrari's history that today Carrozzeria Touring's original name, "Spider da Corsa", has been all but forgotten.

From its introduction in 1948 until the first series 166 MM production ended early in 1951 26 Touring Barchettas were built. The 166 recorded the first of many Ferrari victories at the 24 Hours of Le Mans in 1949 driven by Luigi Chinetti and Lord Selsdon. Biondetti had already scored his third consecutive Mille Miglia victory in his 166 earlier in 1949 and Chinetti, this time with Jean Lucas as co-driver, captured overall victory in the Spa 24 Hours.

Only six 166 MMs were employed by Scuderia Ferrari; the others were snapped up by private entrants like the Marzotto brothers, Franco Cornacchia and Inico Bernabei who raced them enthusiastically, frequently and with great success well into the mid-Fifties.

This 166 MM was the 10th of 25 semi-production 166MMs with Barchetta coachwork from Carrozzeria Touring. Chassis #0024M was originally commissioned as the 1949 Paris Motor Show Car. This example is unusual in that it combines both the 'Lusso' creature comforts with the competition package.

This car was initially finished in the Argentinean National colors of Blue and Yellow as it was intended as a pseudo gift for then Dictator Juan Peron's wife Evita. The buyer of record was the Automobile Club of Argentina, and while rumors persist that it was intended as a gift to Eva Peron, it seems more likely that race driver Carlos Menditeguy was hoping to curry favor with the Peronistas and avoid the country's ruinous import duties. Menditeguy entered the 1950 Mar del Plata open road race as #14, which he won easily. Unfortunately, the temporary importation papers were not made permanent and #0024M was shipped back to Italy in June 1950.

The next owner, Luigi Francesco Zaccaria Terravazzi of Nerviano, Italy, bought #0024M on November 6, 1950 for 6.2M lira. Terravazzi entered it in the 18th Mille Miglia on April 28, 1951. He co-drove with Aprile Palmer taking the wheel, and the car carried #344, which it bears today. The two finished 94th overall and 8th in class. Terravazzi sold the car to Palmer shortly afterwards and Palmer campaigned the car only once more, at the 16th running of the Susa-Moncensio hillclimb on July 21, 1951. Carrying #90, he finished 11th overall, and this would seem to be the last time the car was raced. Palmer kept it for a year and then sold it to Paolo Berio of Imperia.

In 1953, Berio arranged to have the car re-bodied as a Berlinetta by Carrozzeria Vignale, which fitted an aluminum coupe body. Berio didn't keep the car long, selling it on September 4, 1954 to Francisco Rizzoli in Turin, who paid 1.2M lira. Rizzoli handed off #0024M only six months later to Ermani Garbuccio, also in Turin. Then Garbuccio died suddenly on July 6, leaving his children to inherit the car. They promptly sold it to American Theodore Pala for 200,000 lire. At this point, #0024M's Vignale body was painted tri-tone white over blue over grey.

Ted Pala used it as a chase car to follow the 1956 Mille Miglia, then shipped the car uncrated to Los Angeles and repainted the white portion of the body bright red. Pala began to have mechanical problems and removed the drive train, selling the rest of the car to Donald Oreck of Los Angeles in 1958 for $2,500. Oreck hired future Scarab lead mechanic Warren Olson to fit a Corvette 283-cubic inch V8, gearbox and rear axle, and on completion, the car was written up by Wayne Thoms in Motor Trend's July 1959 issue. Oreck sold the car in 1960 to Joseph Spencer, who sold the car to Armand La Rue. He kept 0024 M until 1966 when he sold it to Peter Negri, who would own it until 1974.

Meanwhile, Pala still had #0024M's original engine and drivetrain, which he sold to Tasso Haritos of Hackensack, New Jersey on March 27, 1962. Tasso rebuilt the engine and installed it in his Siata special, but #0024M's engine was now 3,000 miles away from the car. This situation would continue until October 3, 1974, when Negri sold #0024M to Ferrari dealer and historian Stanley Nowak in Mount Vernon, New York. He investigated the car's history thoroughly and then sold the car to Gary Schonwald for $4,000 in December 1974. Nowak wasn't finished either. He tracked down Tasso Haritos, who still had the remains of his old Siata Special, and bought it from him for $2,300, including original parts and the original 32 DCF carburetors and short block. The whole project was delivered to Chris Leydon Restorations of Lahaska, Pennsylvania, where the Vignale Berlinetta body was removed and subsequently sold to UK dealer John Baker. At the time, Leydon had another 166 MM Barchetta in the shop and had only three days to complete a template and body buck for #0024M, as the other car had been sold and was going to Switzerland. Meanwhile, Schonwald continued to collect information for the next 10 years.

Keith Duly of Bethlehem, Connecticut bought #0024M and its original engine in 1986 as part trade for an Alfa Romeo P3 and commenced a five-year restoration armed with enough information on #0024M to get it right. He commissioned its restoration from Neil Twyman of Potter's Bar in England. Twyman in turn sent out the engine, gearbox and rear axle work to be done by noted craftsman Jim Stokes of Idsworth, UK, while the new Barchetta body was handcrafted by Bob Ford. The restoration of #0024M was completed in late 1989, and on January 16, 1990, the car was sold to Don Young of Santa Barbara. In 1995, it was advertised in the Ferrari Market Letter and bought by prominent Japanese collector Yoshiho Matsuda, who shipped it to Tokyo. In 1996, it was featured in the Japanese Scuderia magazine and was on the cover of Prancing Horse two years later. Matsuda sold #0024M to Yoshijuki Hayashi of Tokyo in 2006, and it returned to the US in March of 2008, sold to Robert Harris of Logan, Utah.

Eventually #0024M became for sale at Symbolic Motors and was later put up for auction with RM Auctions.

We have 8766 visitors online