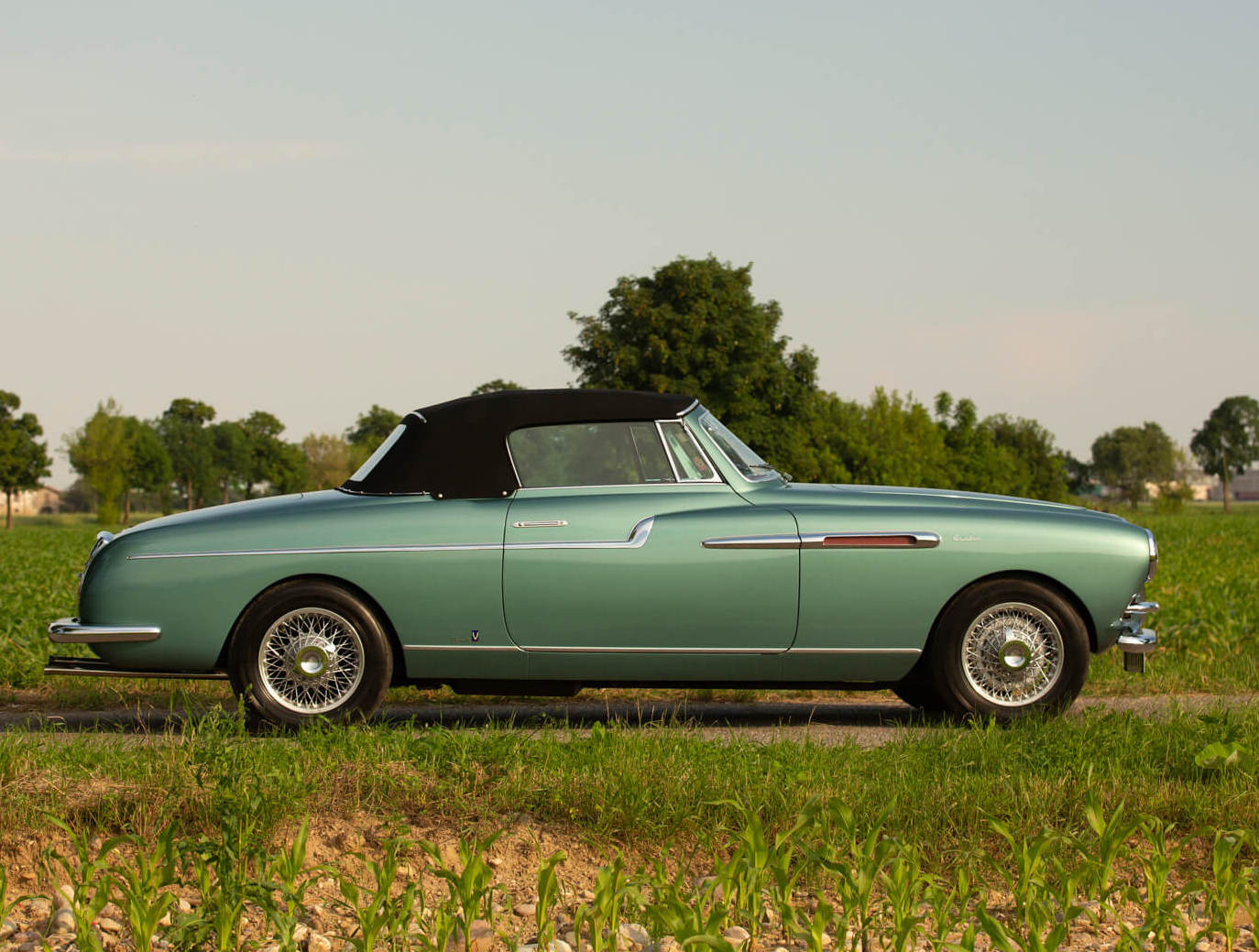 1953 Lancia Aurelia B52 Spider by Vignale

The Lancia Aurelia was designed under the direction of Vittorio Jano and quickly became known for its exceptional build quality, and advanced technology. With this car, Lancia started a post-war tradition of naming its cars after famous Roman roads, in this case the Via Aurelia which connected Rome and Pisa. The Aurelia was also the first mass-produced car to be fitted with a V6 engine.

The Aurelia was in manufacture from 1950 to 1958 with production split into six series. The very first Aurelia’s were B10 berlinas using a 1754 cc V6 engine which produced 56 horsepower. A year later, in 1951, the B21 was released with a larger 1991 cc engine alongside a 2-door B20 GT Coupe with a shorter wheelbase. As the years passed, the development continued with the third series in 1953, fifth series in 1956 and the final, sixth series, in 1957.

The Lancia Aurelia B50 was a rolling chassis which was made available to coachbuilders, allowing them to design and build low-volume series, or showcase one-off bodies. However, the B50 had its limitations, it was heavy and its 1.7 litre V6 engine offered limited performance, so in 1952, Lancia unveiled the B52, an improved and lighter chassis fitted with a more powerful 2.0 litre V6. In 1952, Lancia built a mere 86 B52 chassis, followed by a final 12 examples in 1953.

The chassis offered here, B52-1097, was completed at the Lancia factory in early 1953 before being delivered to Carrozzeria Vignale, in the same way as Ferrari often delivered its 166 or 212 chassis to its chosen coachbuilder, including Vignale. Upon delivery, this chassis was fitted with the elegant one-off Spider coachwork we see today, Carrozzeria Alfredo Vignale designed and built exquisitely detailed bodies, using a variety of chassis, including Ferrari, Alfa Romeo, Cisitalia, Maserati, Fiat and ofcourse Lancia.

In 1955, this chassis made its first public appearance at the Brussels Motor Show in Belgium where it was displayed on the Lancia stand with its distinctive Vignale coachwork finished in Metallic Lake Green with a Bordeaux leather interior, just as we see the car today.

Having remained in Belgium through to 2007, this very special Aurelia was entrusted to restoration specialists, Carrozzeria Quality Cars in Vigonza, Italy. During the restoration, the car was found to be highly original, retaining many of the signature one-off components which would otherwise have proven near-impossible to reproduce. Sections of the original paint and leather interior were found, and these were used to ensure the car was brought back to its correct ‘as-built’ finish.

We have 8659 visitors online