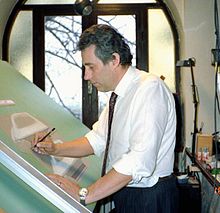 Born in Turin, Italy in 1943, Martin began working in 1960 for Giovanni Michelotti's Studio Tecnico Michelotti. In 1967, he started to work for Carozzeria Bertone, and one year later, in 1968 he became Chief of the Styling Department at Carozzeria Pininfarina. He subsequently worked for De Tomaso (1972–76), where he was Style Center Director for Ghia.

Martin's work has received varied reception. In 2005, the Daily Telegraph called the Fiat 130 Coupé a "majestic blend of severity and grace, boldness and subtlety, sharp angles joined by soft curves, a true catwalk beauty, a masterclass that was widely copied in the Seventies but never equaled."

After its debut at the 1970 Geneva Motor Show, the Ferrari Modulo went on to be shown (repainted white, from its original black) at the 1970 Turin Motor Show and at Osaka's Expo '70, before winning 22 international design awards. A 2007 retrospective said the Modulo was "a milestone in the automobile design history with a deep influence on the 1970′s car styling." In 2008, Car Design News called the Modulo "iconic". The Modulo placed third in Jalopnik's 2008 competition for the top ten best "Wedge Car Designs Of The 60s, 70s and 80s."

By contrast, the Rolls Royce Camargue ranked in 2010 as one of the "10 Worst Cars" as chosen by readers of the Globe and Mail; ranked 38 in the 2005 book Crap Cars by Richard Porter (the author saying the car "looked utterly terrible)" and ranked 92 in a 2008 poll of the 100 ugliest cars of all time by readers of The Daily Telegraph. Autoblog said the Camargue had been ranked "conspicuously low on the list," adding the Camargue "really was horrid, no matter how well it sold." Responding to the Telegraph list, noted automotive journalist James May said the Camargue "is not ugly, either. It has presence, like that pug-faced but well-dressed bloke down the pub."